Le Pont de Montvert is a picturesque old mountain village with a beautiful bridge of natural stones at the foot of the Mount Lozère. Equidistant from the Causses, the gorges of the Jonte and of the Tarn, the Margeride and the Cévennes, le Pont de Montvert village is also located on the Stevenson path (GR70), that hikers and lovers of great natural landscapes will appreciate.

At an altitude of 900m, the village is characterized by its stone bridge (the Pont Rouméjon) which spans the Tarn and its clock tower (originally a toll tower). Its long quay is still today fitted out with shops (*) and place of animations.

Every Wednesday morning, you can discover a craft market and local producers on the church place. We recommend the Auberge des Cévennes restaurant, as a good place to eat.

Characterized by a thoughtful architecture perfectly integrated into the Cévennes landscape, le Pont de Montvert is a dynamic village with many events organized especially during the summer period.

All of these rural constructions are reflecting the Cévennes spirit: massive, solid, unadorned and extremely simple, representative of its temple.

Small narrow streets, built in granite stone with a roof in schist lauzes, a practice that became popular from the 18th century, replacing the straw roofs, coming from rye crops.

The Pont de Montvert is also, and above all, a place steeped in history that has left its mark on the Languedoc and the Cévennes. Birthplace of Pope Urban V in Grizac, cradle of the Camisard War (revolt of the Protestant Cévennes peasants to defend religious freedom), with the assassination of the abbot of the Chayla (1702).

Land of maquis, the village is surrounded by a beautiful and rebellious nature, thanks to the Cévennes National Park which protects and ensures the biodiversity conservation.

Located almost at the geological limit between granite and schist, its biosphere is classified as a world reserve by UNESCO.

It is a rich and very diversified territory, where you will discover a preserved and unusual wild nature, with magnificent views and authentic sites that invite you to live wonderful experiences.

It is a dream place for a picturesque, sporty and cultural escape. 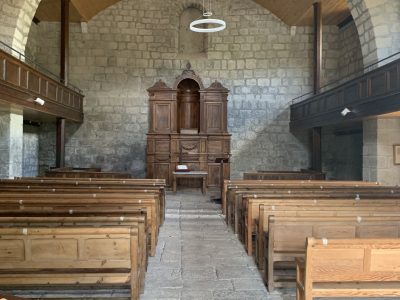